Ship Finance International Limited (NYSE: SFL) (“Ship Finance” or the “Company”), today announced that it has entered into an agreement to acquire the newbuilding ultra-deepwater drillship West Polaris, from a subsidiary of Seadrill Limited (“Seadrill”).
With a total acquisition cost of approximately $850 million, this is a record-breaking sale/leaseback transaction in the maritime industry. The vessel is expected to be delivered end of June 2008 from Samsung Heavy Industries in South Korea, and will be chartered back to the seller for 15 years on a bareboat basis, fully guaranteed by Seadrill.
The Company has received commitments for a $700 million loan facility from a syndicate of leading international banks, and the remaining $150 million will be funded from the Company’s available liquidity. 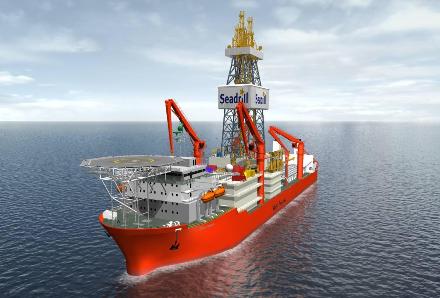 West Polaris will be employed initially by Seadrill on a 4 year contract to Esso Exploration Inc., a subsidiary of Exxon Mobil Corporation. This contract has a value of approximately $815 million, and start-up of operations under the contract is expected to be three months after delivery from the shipyard.
The aggregate charter payments from Seadrill over the first 51 months will be approximately $491 million (including $10 million in the first three-month mobilization period). For the remaining lease period, the aggregate lease payments will be approximately $631 million.
Seadrill has been granted several fixed price purchase options, first time after 51 months at $548 million and last time after 15 years at $177.5 million.
The $700 million loan facility will have a 5 year term and the average annual repayment of debt will be approximately $65 million per year in this period. The average annual net cash contribution, after estimated interest expense and debt repayment, will be approximately $23 million, or $0.32 per share.
Based on this highly accretive transaction, the Company intends to increase the quarterly dividend by two cents per share in the third quarter, when the new drillship is delivered and has commenced its operation.
Lars Solbakken, Chief Executive Officer in Ship Finance Management AS, said in a comment: “We are very pleased to announce our first acquisition of an ultra-deepwater drillship. Seadrill is among the world’s leading offshore drilling contractors with a market capitalisation in excess of USD 13.5 billion. They have a fleet of state-of-the-art ultra-deepwater drilling units and an impressive fixed contract backlog, currently in excess of $12 billion. Furthermore, this investment in the oil exploration sector confirms our strategy to continue diversifying the asset base and grow our long-term charter business.
The strong fundamentals of the offshore industry combined with long term charter coverage and high quality credit counterparts makes this a very attractive industry for us to invest in. We see a large potential in providing further flexible solutions to Seadrill as well as assisting other major offshore companies to optimize their capital structure and create flexibility for further growth.
Over the last 12 months, Ship Finance has announced new investments of approximately $1.5 billion, and our fixed-rate charter backlog, excluding profit share, is currently in excess of $6.6 billion.”
May 19, 2008
The Board of Directors
Ship Finance International Limited
Hamilton, Bermuda
Contact Persons:
Lars Solbakken: Chief Executive Officer, Ship Finance Management AS
+47 2311 4006 / +47 9119 8844
Ole B. Hjertaker: Chief Financial Officer, Ship Finance Management AS
+47 2311 4011 / +47 9014 1243
About Ship Finance
Ship Finance is a major ship owning company listed on the New York Stock Exchange (NYSE: SFL). Including newbuildings and announced acquisitions, the Company has a fleet of 73 vessels, including 35 crude oil tankers (VLCC and Suezmax), 2 chemical tankers, 8 oil/bulk/ore vessels, 13 container vessels, 3 dry bulk carriers, 6 offshore supply vessels, 3 seismic vessels, 2 jack-up drilling rigs and one ultra-deepwater drillship. The fleet is one of the largest in the world and most of the vessels are employed on long term charters.
More information can be found on the Company’s website: www.shipfinance.org
Cautionary Statement Regarding Forward Looking Statements
This press release may contain forward looking statements. These statements are based upon various assumptions, many of which are based, in turn, upon further assumptions, including Ship Finance management’s examination of historical operating trends. Although Ship Finance believes that these assumptions were reasonable when made, because assumptions are inherently subject to significant uncertainties and contingencies which are difficult or impossible to predict and are beyond its control, Ship Finance cannot give assurance that it will achieve or accomplish these expectations, beliefs or intentions.
Important factors that, in the Company’s view, could cause actual results to differ materially from those discussed in this presentation include the strength of world economies and currencies, general market conditions including fluctuations in charter hire rates and vessel values, changes in demand in the tanker market as a result of changes in OPEC’s petroleum production levels and world wide oil consumption and storage, changes in the Company’s operating expenses including bunker prices, dry-docking and insurance costs, changes in governmental rules and regulations or actions taken by regulatory authorities, potential liability from pending or future litigation, general domestic and international political conditions, potential disruption of shipping routes due to accidents or political events, and other important factors described from time to time in the reports filed by the Company with the United States Securities and Exchange Commission.